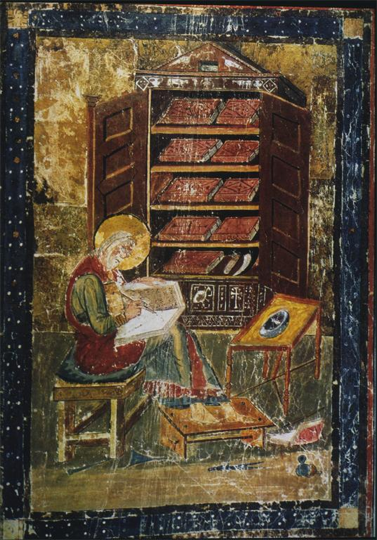 This course is intended to familiarize students with key issues and scholarly debates in the history of the early Middle Ages in western Europe (for the purposes of this class AD 400-1000).  We will discuss topics such as (but not restricted to) the "Fall of Rome", ethnicity, urbanism, Christianization, literacy, gender roles, and the origins of "feudalism", and we will consider both textual and material sources of evidence for these topics.  Students will be expected to participate actively in class discussions every week.  Each student will write a book review, which will be presented in class, and will produce a bibliographic essay on the topic of the student's choice, which will also be presented in one of the last class meetings.

Participation:  A large part (30%) of the course grade is based on class participation.  You are expected to do the reading for each week, and come prepared to discuss it.  Your participation grade will be based as much (or more) on what you say as how much you say.

Book reviews:  Each student will write two book reviews, which will be presented to class (10 mins) on the day listed on the syllabus.   Most of the books listed are monographs, and some are collections of essays.  The book reviews should be between 1000 and 1500 words long, and should take the format of a scholarly book review (any journal's format may be used).  These books have been reviewed, of course, when they were published; I recommend that you NOT look at those reviews when writing your own, but you should, of course, look at reviews of other books to get an idea of the way you might go about it.

Bibliographic essay:  You will write a 10-15-page bibliographic essay, on a topic of interest to you and related to the early Middle Ages in some way.  A few suggested topics, or suggestions for defining a topic, can be found at the end of this syllabus, but you should write on what is of interest to you.   You must turn in a statement of your topic on Feb. 3, and you must have discussed it with me first (during office hours or by appointment; talking about it before or after class is not sufficient).  A preliminary bibliography for your paper must be turned in on Feb. 24.  Some of the materials you may need may not be in our library, and you will be expected to order them from interlibrary loan.

Presentation:  This project will result in a 10 minute presentation in the last two class meetings.  This very short presentation may be done from notes or read from a text; you should BRIEFLY explain what your topic was, and what you discovered about its bibliography.  SINCE EVERYONE WILL BE PRESENTING IN ONE CLASS MEETING, YOU WILL HAVE TO STAY STRICTLY TO TIME.

All required readings for this class will be available as PDF files in the Oncourse Resources folder, or will be on reserve in the Kent Cooper Room in the Wells library, or will be available online via IUCAT.  The sources are noted on the syllabus.  Many of the books are available for purchase through retailers such as Amazon (or directly from the presses), and if you feel that you will want to own these books, I encourage you to buy some of them.

Required books that can be purchased for a reasonable sum are:

Hodges, Richard and Whitehouse, David.  Mohammed, Charlemagne, and the Origins of Europe:  Archaeology and the Pirenne Thesis.  London:  Duckworth, 1983.

Rather than listing "additional readings" on the syllabus, I have made available to you, in the Oncourse Resources folder, an EndNote bibliography that I used to construct this class.  Each entry is annotated with "keywords" that roughly correspond to the subjects on the syllabus, so that you can search it easily by topic.

Sarris, Peter. "Continuity and Discontinuity in the Post-Roman Economy," Journal of Agrarian Change 6 (2006):  400-413.  online through IUCAT

Hines, John.  "The Becoming of the English:  Identity, Material Culture and Language in Early Anglo-Saxon England."  Anglo-Saxon Studies in Archaeology and History 7 (1994):  49-59. PDF

Curta, Florin.  The Making of the Slavs - History and Archaeology of the Lower Danube Region c.500-700.  Cambridge:  Cambridge University Press, 2001.

Haldon, John. Byzantium in the Seventh Century: The Transformation of a Culture. Cambridge: Cambridge University Press, 1993.

Heather, Peter, ed.  The Visigoths from the Migration Period to the Seventh Century – An Ethnographic Perspective.  Woodbridge:  Boydell, 1999.

Kennedy, Hugh.  The Prophet and the Age of the Caliphates: the Islamic Near East from the sixth to the eleventh century.  London:  Longman, 1986.